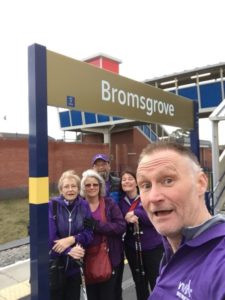 We are so proud of Instructor Ian Northcott and his band of brilliant Nordic Walkers from Bromsgrove. Apart from Nordic walking at every opportunity, these Guys have also adopted a section of their local Canal as part of a wider programme launched by the Canal & Rivers Trust.

This led to them being filmed for an ITV programme with Julia Bradbury which features Britain’s best walks which was aired on 30th Jan. To add more excitement, a call came into NWUK HQ on Tuesday  23rd Jan asking if Ian and his group would like to join Julia promote the programme on the BBC One show…………. on the followingThursday! 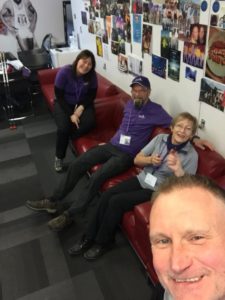 Ever resourceful Ian sprang into action, arranging cover for his classes (he has sessions seven days a week) and asking for people to accompany him on the trip to the BBC studios in London. He had lots of offers and eventually had to narrow it down to 4 at the request of the One show team. So it was that Paula, Geoff, Kathy and Eileen became the Famous Five!

Their adventure kept us chuckling all day as they got kitted out in purple and headed off to London for their LIVE appearance on the show. Sending us pictures from the rehearsals and green room and then Nordic walking onto the Live show to chat with Matt Baker, Julia Bradbury and Angela Scanlon. 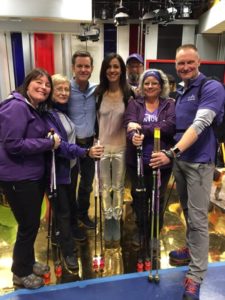 As you can see from the pictures, they had a ball but it was a really long day in order to fly the purple flag for a couple of minutes! Within seconds of their enthusiastic appearance, people were booking in to Tasters, keen to give Nordic walking a try and here at NWUK HQ, we know it wont be long before they are telling their friends they were glad they saw the Famous 5 on the One show!

Their appearance on Britain’s best walks was equally well received and we even spotted NWUK Instructor Nic Sproson in the opening titles of the show as an added bonus!

Please click on a star to let us know if you liked this post. We'd love your feedback!

No votes so far! Be the first to rate this post.